March 25, 2019
“This story shall the good man teach his son;
And Crispin Crispian shall ne'er go by,
From this day to the ending of the world,
But we in it shall be rememberèd—
We few, we happy few, we band of brothers;
For he to-day that sheds his blood with me
Shall be my brother; be he ne'er so vile…”
William Shakesphere

On the late afternoon of March 30th, 1967, Marine 2nd Lieutenant John Paul Bobo silently led his men from the Third Marine Division through the cool darkness of the Quang Tri Province in the Republic of Vietnam. The Summer season, with its hot, sticky nights and torrential downpours had not yet arrived. Even though he was only 24 years old, by this time he was only a few months short of completing his year long tour. The young man from Niagara Falls, New York had become a combat hardened veteran whose courage and fortitude had been tested in the far off, deadly land where the torturous conflict raged. His unit had been tasked with conducting a night ambush against the North Vietnamese Army (NVA) forces operating in the area.  While establishing their ambush positions, they were attacked by a larger NVA force armed with heavy machine guns, automatic rifles, grenades, and mortars.
With murderous enemy fire pouring in, deafening explosions sending razor sharp shrapnel through the air, and men on both sides screaming in agony and rage, he quickly organized the Marines into a hasty defense, moving to each pocket of men and directing their fire towards the enemy. The weapons of his platoon included hand held rockets that could inflict a devastating toll even on well dug in positions, and when that team was taken out by enemy fire, he quickly organized Marines to replace them to fire the rockets at an NVA heavy machine gun position. In the midst of a raging hurricane of violence and death, Lieutenant Bobo continued to direct his men, unleashing deadly torrents of fire and high explosives at the enemy. A high arcing NVA mortar round whistled down through the trees, impacting just a few feet from where he was standing. The resulting explosion was at once mind numbingly violent and deadly. Lieutenant Bobo's lower right leg was jaggedly blown from his body, resulting in stream of blood pulsing over a tangle of ragged bone, muscles, and tendons. An improvised tourniquet made from a web belt was applied to slow the bleeding, and Company 1stSgt Raymond Rogers directed the badly injured Lieutenant to be evacuated out of the fight.
Regaining his senses after the shock of the wound, the young Lieutenant refused to leave the battle. Incredibly, he grabbed a shotgun, jammed the remaining charred stump of his leg into the dirt to slow the continued bleeding, and continued the fight, delivering a hail of devastating fire against the oncoming enemy trying to push through into the Marine's position. Inspired by his heroic efforts, his men continued their valiant stand, eventually turning the tide and repulsed the attack. During the fight, 1stSgt Rogers was also wounded, and an NVA soldier stood over him to deliver the final blow. Lt Bobo killed the enemy soldier and many others charging their position. At some point in the chaos, Lieutenant Bobo fell, mortally wounded. Soon after the battle, his Battalion Commander recommended him for the nation's highest award, the Medal of Honor. The recommendation for the Medal of Honor had a long journey up the chain of command and through the Department of Defense before it would eventually be signed by the President Johnson. The award was presented to his parents by Secretary of the Navy Paul Ignatius at the Marine Barracks in Washington, D.C. in August of 1968. 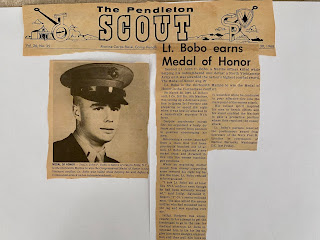 Popular posts from this blog

December 04, 2019
Around a quarter of a century ago, I was given a vision of a company that was to be created. It was to be a different kind of company in many ways from others that existed at the time. From a focus on employee quality of life, to a foundation of integrity in all things, to an unparalleled level of technical expertise. We would flip the equation, put our team members first, provide them the leadership and structure to enable them to take care of our clients, and trust them to provide an exceptional experience for our clients. We would grow with a focus on stability and commitment to the team, understanding the importance of success to the families each team member represented.
I was blessed with a wife of strong faith, who kept us going with her teacher's salary when I only had enough money to pay employees, and who prayed fervently for our team to successfully come through the storms. She not only put up with my Marine Deployments around the world, but kept "home operations&…
Read more

So You Want To Start a Business? A Note To 23-Year-Old Me Part 1

March 31, 2019
I was twenty-three when the first elements of my business plan started coming together. In the years since that time, I've learned some valuable and difficult lessons about founding, leading, and growing a company from the ground up. I recently came across some notes I made back then, and the thought crossed my mind that I sure wish I could go back and tell that guy a few things. This series of blog posts will cover the first five things that I'd share with someone about to embark on the adventure of starting a company. Here's number one.

1. The importance of capital and cash flow. Working capital (cash) is the lifeblood of a company.  Run short of it, and your business will suffer. The adage that "cash is king" is true. You can have the most ambitious growth plan or most brilliant idea in the world, but if you get to the third quarter of operations and you can't make payroll or pay your taxes, you'll be in deep trouble. Our system is known as capitalism f…
Read more

A Shared Legacy of Values - Let's Do Government Better!

January 30, 2020
I grew up in a Southern Democratic household. My family believed in the party that brought us electricity through the TVA, infrastructure and jobs through the CCC, and national leadership during WWII. When I registered to vote, it was naturally as a Democrat. (I was attacked for this recently by a politician trying to dig up dirt on me. I guess that was all he could find.) I switched my affiliation soon after college because I was inspired by Ronald Reagan's courage in standing up to the Soviet Union, and his vision and implementation of a revitalized America. I am a proud Republican, and I am dedicated to the Constitution I swore to protect as a Marine. I believe there are good folks in both parties who earnestly want what's best for our country, and that the extremes don't represent the vast majority of our people. We owe it to those who have gone before, and to those who will come after, to work together to leave our home a better place than we found it. Our party has …
Read more

Mark Cavaliero
I am a follower of my Lord and Savior, Jesus Christ. I count any good thing that’s ever happened to me as a gift from Him one way or another. He has also provided me with the strength to get through life’s challenges and heartaches. I live every day stumbling, failing, and occasionally managing to live up in some small way to the example that he set for us. I don't always get it right the first time, but I keep trying with dogged persistence. I have thankfully accepted his blessed assurance that he has a place for me when this life is over.